The Stallion Company Auction Site > Auctions > Lux Z – 2 straws
Report this auction
You need to be logged in to report. 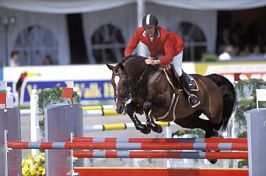 Lux is one of the world’s leading eventing and jumping sires. Bred at the famous Zangersheide station, he was later imported to Ireland to improve the “scope and step” of the traditional Irish mares. He produces elegant foals with an abundance of talent and scope.

Lux Z started his career in Holstein before moving to The Netherlands. Later he commenced a successful international career with Italian showjumping rider, Jerry Smit, and the pair competed at the 2000 Olympic Games in Sydney. They also won the Pulsar Crown competitions at Valkenswaard and Cannes, and participated in the WEG in Jerez in 2004. Lux won over a million euros in prize money throughout his career.