The Stallion Company Auction Site > Auctions > lauriston, stallion, straw > Lauriston – 2 straws
Report this auction
You need to be logged in to report. 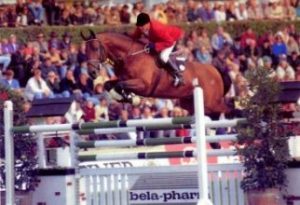 LAURISTON winner of the German 6year old jumping Championships in 1992 with the record score of 9.7 for style and scope. Bred by Paul Schockemohle.
He was purchased by the Bolvorm Stables, Holland, for 2 million DM IN 1992. Under the name of Bolvorm’s Lauriston he continued his National and International career ridden by Jos Lansink and Ben Schroder, winning in Modena and Waterloo. Lauriston sired 10 International horses from his first crop of foals. Amongst these Catapult (Billy Twomey and Michael Whitaker) and Promise Me Ian Miller’s Athens 2004 Olympic ride.