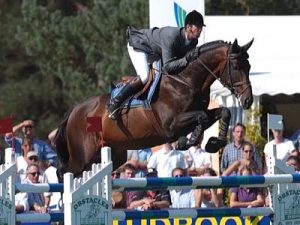 ⦁ Hand In Glove x Laudanum
⦁ Jaguar’s achievements in sport include wins in the La Baule GP in 2005 and 06. He also won the Sires of the World in Lanaken in 2007, competed in the Beijing Olympics and then in 2010 competed in the French Young Rider team, winning the YR Championship. He is now producing top eventers ranking in the WBFSH sire rankings in the top 5 for the last 5 years.