The Stallion Company Auction Site > Auctions > Acord II – 1 straw
Report this auction
You need to be logged in to report. 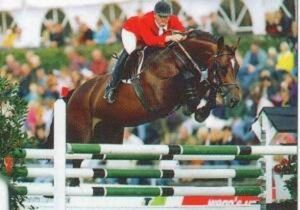 Acord II followed in the distinguished footsteps of his older brother, Acord I, who was an international showjumper in The Netherlands before being sold to the USA. His younger brother, Acord III was the champion stallion in Brazil.

Acord II continued to compete up to Advanced level for winnings of €4,026, however the 2014 Hanoverian Yearbook, records that his progeny have won over a two million euros, with 864 jumpers who have placed in competition, and 173 dressage horses. He has produced 27 jumpers with winnings in excess of €15,000, the most successful of which has been Artur, with the American rider, Aaron Vale, who won €90,459, followed by Annabell with €76,664 and Dobel’s Araconi, with €40,224 but he has five more with winnings in excess of €30,000: Acoretto, Adolfo FRH, Aladin, Armani, Azzuro Classico, Broere VDL Atlantic and Horse Gym’s Aribo.

Acord II has produced more than 40 stallion sons, one of the more famous is Broere VDL Atlantic, who was the Six Year Old Jumping Champion at the 1999 Bundeschampionate with Ulrich Kirchhoff. Another stallion son to shine with Kirchhoff is Action Hero – like Atlantic, he is based in Holland. In Germany his stallion sons are Acorado, Antaeus, Alboretto, Ars Vivendi, All in One and As di Villagana.